Stay informed about the latest developments in the industry is becoming increasingly challenging; each day, our favorite newspapers and email boxes are flooded with supposedly new “game changing” concepts and innovative technologies that will revolutionize our everyday work.

The most recent buzzword that is taking over the web since a few months is as well mysterious as misunderstood: the Blockchain.

For those of you who already saw this word somewhere, wondered what it was all about, searched for a definition and gave up as you found out it was related to complex theoretical informatics, the next paragraphs are for you. The Blockchain is about to emerge as a BIM-related technology (as explained in the following article) and it might not be as useless as you think. The following article aims to clarify the basics of the Blockchain to gain a better understanding of how it will influence BIM very soon.

What is the Blockchain?

First of all, one of the best ways to understand how the Blockchain works is to process a mental picture of its structure. As its name implies, the Blockchain should be visualized as a series of virtual cubes (called Blocks) aligned in a linear, vertical structure.

The very first block of all time, the “mother of all Blocks”, was created in 2009: it is called the Genesis Block. Following a hierarchical arrangement, all blocks created afterward are organized in successive levels (or layers in the Blockchain jargon) corresponding to their time of creation. The newest Block is always on the top of the chain. Just like generations in a family tree, Blocks having the same parent Blocks are considered as “siblings” and lie on the same layer. Similar to human DNA, each individual Block possesses a unique identification code – called hash – of maximum 80 characters. Moreover, every Block also contains the ID of its predecessor in the same chain.

There is no limit on the number of Blocks that can be added to one chain: Blocks can be created infinitely and chains are continuously expanding vertically. As of now, (August 31rst, 2017, 08:25 AM), the Block with the highest height (layer) number is 482751. 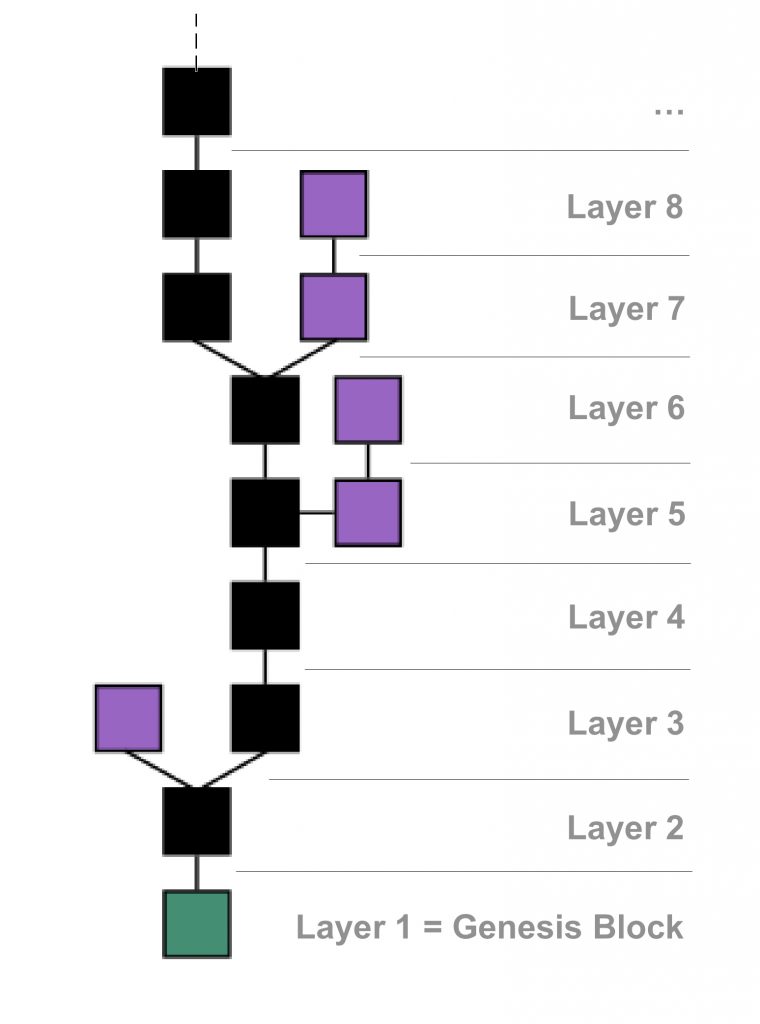 The main chain (black) consists of the longest series of blocks from the genesis block (green) to the current block.

What is the Blockchain used for?

To store information and record transactions. The Blockchain is a digital ledger of transactions. Each Block can contain a limited amount of data (transactions) entered in the form of codes and ciphers. Once the transaction has been validated, the block is permanently locked and the information enclosed is cryptographically sealed: it cannot be modified anymore. To include additional data, a second Block on the same chain must be generated and the same process applies. This process is fully automatized which makes the intervention of intermediaries (i.e. banks) obsolete and thus refers to peer-to-peer transactions.

It exists two different types of members in the Blockchain Network: Users and Miners. Users are natural persons which are sharing data and requesting transactions through the Blockchain. Anyone can be a user, it is completely free of charge and only requires a previous registration on the Blockchain Website. The identity of all users is protected; there is absolutely no way to know who is behind which transaction without the identification data (username and password). If you are still skeptical about the level of privacy protection offered by the Blockchain, just remember that most hackers are using the Blockchain platform to request the payment of ransoms. If they are able to use the system to remain unidentified, it is probably because it is almost impossible to discover their real name.

Miners are entities (mostly collectives, businesses or just people with very powerful computers) offering their digital infrastructure in order to contribute to the verification of all transactions requested by all users of the Blockchain. Using the computing power made available by Miners, the network solves complex algorithms to authenticate and certify each transaction. In return for their services, Miners are rewarded with fees (virtual money) associated with the transactions that they helped to complete.

The Blockchain is a public and distributed ledger: it means that all chains can be viewed by any member of the network and every participant is allowed to update the database. The whole network is responsible for authorizing transactions, following a principle of consensus. At first, it might sound a little odd to state that a large group of computers must reach an agreement in order to approve thousands of transactions every day, but the structure of Blockchain was built in a way that these operations occur totally trouble-free. Transactions can be seen by every member of the network but since the identity of users is protected, it is no value for the members to know that User A transferred 5€ to User B (for instance). The overall authorization process is achieved by the network within more or less 10 minutes.

User A wishes to send money to user B. A request a transaction, which is enclosed in one Block. The Block is sent to the Network, where Miners are verifying the antecedent of A (if A has proven that he has enough money to realize the transfer). If all antecedents of A allow the transfer, the transaction is approved, the block is sealed (or timestamped) and added chronologically to the Blockchain.

Who can access the data stored in the Blockchain?

Access to the information stocked in the Blockchain can be restricted to three specific levels of privacy:

Moreover, authorizations can be limited to a certain time frame (i.e. 24 hours), or to specific portions of the full set of data.

The flexibility of the Blockchain with regard to data access control enables the concept of Smart Contracts which will be further discussed in the following article.

Why do we need the Blockchain?

The Blockchain is especially innovative because it implies that the control of the records stored is shared across all users of the network. Its database is decentralized, which means that it is not owned by any administrator or central player: it belongs to all members of the network. Moreover, a copy of the Blockchain is available for every member to download which makes the database very transparent and the system highly secure. To hack the Blockchain, ill-intentioned people would need to modify the data history of the chain, which is almost impossible to do because hundreds of thousands of people own a copy of the record.

The global Internet as we know it today, where very powerful centralized actors (Google, Facebook, Amazon, etc.) are completely controlling the information dissemination, presents a high level of risk for the privacy of its users. Not only users have practically no power over protecting their personal data – which is often monetized for marketing purposes – but the whole network is affected by the decisions taken by those administrators. For instance, if Facebook decides to charge fees to access to its platform tomorrow morning, users will be free to leave the platform but some of them will stay and pay the fees, contributing to the further enrichment of the company. With Blockchain, however, the power is distributed among all members through a majority consensus approach and the rewarding is accessible to everyone contributing to the growth of the community.

Now if you are still wondering what are the practical applications of the Blockchain and how it will impact the future of BIM and the construction industry, the following article might interest you.